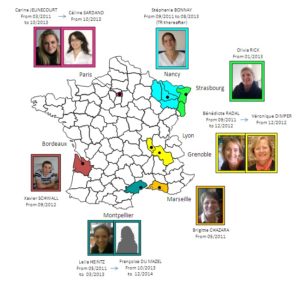 This project received funds from the European Community (FP7/2007-2013) and in France from the French National Agency for Sanitary Safety of Food (ANSES, contract FSRF 2008-3), French National Cancer Institute (INCa), Pfizer Fondation and League against cancer.

How did your centre become involved in MOBI-Kids?

Dr Martine Hours coordinated the Interphone study. As Mobi-kids study applied to children and adolescents, the National Registry of Childhood Solid Tumors (RNTSE) was more appropriate to coordinate the study.

Are you involved with more than fieldwork?

Our centre has participated to Mobi-Expo study (with 65 volunteers) whose objective is to characterize the use of mobile phones in young people and improve the assessment of radiofrequency exposure in the main Mobi-Kids study.

What are your research interests (beyond MOBI-Kids)?

Dr. Lacour focuses on childhood cancer registration and descriptive epidemiology specifically in children solid tumours. She is also interested in etiological studies, since she belongs to the INSERM team UMR-S 1113, EPICEA. In this context, she also contributes to set up the Cohort of the national pediatric registry which ensures the follow-up of all cases included in the national childhood cancer registries since 2000. The aim is to know the health status f childhood cancer survivors and to study the long term iatrogenic effects.

Why do you think MOBI-Kids is an important study?

MOBI-KIDS study is a unique study by its international scope and its optimum power conditions with around 1000 cases and 2000 controls going to be included.

What do you think is the most interesting part about MOBI-Kids?

The collaboration with worldwide research teams is very interesting and fruitful. Besides it was a challenge for each team to conduct this complex study including both children and young adults with a serious but rare disease requiring collaboration with many hospital services.